Welcome to the The 10 Best Anime of 2018. This year is almost over and I can’t believe it. We got loads of great shows this year and now I will be breaking down what I consider to be my top 10 shows of the year. Of I didn’t manage to get around to watching many shows like Bloom Into You or Irozuku so do take this list with a pinch of salt and that these are just the shows I enjoyed watching the most throughout the year! Please remember this is all my opinion! If you have your own top 10 please do put them in the comments! Let’s Begin.

10. Darling in the FranXX

Starting off at number 10 we have Darling in the . No one anticipated the release of these anime series and neither did I, but boy did I love them. With arguably one of the best anime girls of 2018 at the helm of the show, Zero Two. The show did romance right and took us on an emotional joyride with many twists, turns, ups and downs. It was an experience to have. I loved this show, but the sheer greatness of anime we got this year means that it ends up at the number 10 spot on my 10 Best Anime of 2018.

When Devilman Crybaby came out at the beginning of the year, it accomplished two important things: it gave Go Nagai’s action-horror manga series a much-needed remake, modernizing it for today’s audiences, and it gave us a direct adaptation of the heartbreaking story of Akira Fudo and Ryo Asuka, which is set in the waning days of a world gradually coming to an end due to an army of demons capable of wiping them out.

It also managed to put Netflix’s anime efforts on the map, as the superb series turned into a conversation piece for longtime anime fans and new converts alike for weeks. Netflix, your anime efforts paid off and landed you at the ninth spot of my 10 Best Anime of 2018.

Created to celebrate the 50th anniversary of boxing manga series Tomorrow’s Joe, Megalo Box follows an underground fighter named Junk Dog in a futuristic world where fights take place in exo-frames that boost the power of each fighter several times over. After years of throwing fights for the sake of his boss, Junk Dog finally decides to make a run at the top by entering Megalonia, a tournament to decide the best Megalo Boxer in the world. Despite being set in such a dreary world, Megalo Box is a beautiful show, channelling legendary series like Cowboy Bebop with its art direction and having some of the slickest music of the year for its soundtrack.

I didn’t think at the beginning that I would enjoy the show as much as I did, but it was an unexpected but gladly accepted ride, one that puts it at number 8 on my 10 Best Anime of

Coming back to this franchise definitely reminded of the Shounen Jump action I was looking for. A superhero action series like this isn’t complete without its colorful character cast and their action roles. It offers all sort of characteristics where every hero or villain is unique. However, it may be that some episodes dropped in quality compared to previous seasons.

The explosiveness and energy of the fighting scenes from some of the more important episodes really are worth praising. There’s also the dynamic character motions with emotional content that adds more value to many scenes this season. even environmental physics and other background animation that are worth paying attention to. To me, I think My Hero Academia Season 3 started off a bit slow. However, it was able to work itself up again to bring these storybook characters to stardom. The familiarity of the soundtrack also brings together moments that you won’t forget.

After three seasons of My Hero Academia, I think it’s safe to say that the momentum of this roller-coaster isn’t going to stop for a good while. Superhero shows often portray characters as exactly what they are – a symbol of justice and peace. While My Hero Academia does continue to follow that concept, it has moments that truly capitalizes on the meaning of this ideology. With more episodes on the way in the future, I still have bright hopes for this franchise. As a manga reader myself, I am excited for Season 4 which is confirmed to air in 2019 and will be covering, my personal favourite, the Culture Festival arc and will feature a lot of Deku and Mirio fight scenes along with a brand new storyline for All Might.

Looking back on Banana Fish, I see a series with a lot of upside to it. A carefully handled crime drama, innovative for its time, critically acclaimed source material, etc. And despite having my own criticisms against the series I would still recommend this to anyone interested in the series at all. Despite creative liberties, it is at its core a well-made drama with emotionally powerful moments that are likely to entrance you in a tale barely brought to light by anime. There may be homoerotic undertones present, but the series was not made solely for such. Instead, it clearly values a strong appreciation for storytelling, for that is how people from all different backgrounds are able to relate to what is told here at a fundamental level.

This show was great, but not great enough to rank higher on this list of my
10 Best Anime of 2018.

Now this choice might be slightly controversial. I am one of the huge fans of SAO who has defended the series countless times, and I am glad to say that I did not have to defend it as much this time. As a SAO Light Novel reader the twists in the series were not as much of a surprise to me as they were to others; however, even the most hardcore SAO haters can’t hate on Alicization. It takes everything that made the Aincrad arc so beloved and improves it thousand-fold.

Featuring some fantastic animation courtesy of A-1 Pictures, it sees Kirito dive into a strange new virtual world where he’s the only human and searching for a unique AI girl known as Alice.

SAO’s usual tropes have been peeled away in this series, leaving only its strengths: a good mystery, a strong bond between Kirito and his new friend, Eugeo, and great sword fights; leading to one of the best stories of the fall.

The success of Alicization makes me shiver in anticipation for the rest of the arc and I can’t wait for an adaptation of the new SAO Canon, Sword Art Online: Progressive, which re-does the Aincrad arc floor-by-floor with more Kirito X Asuna and many more adventures.

Alicization is packed with emotion, action, adventure and our favourite swordsmen Kirito and manages to snag the 5th spot on my list for
10 Best Anime of 2018.

Written by Kana Akatsuki, the light novel series is a story about Auto Memory Dolls. They are dolls are made by Orland, a scientist who used them to assist his wife in writing novels. However, these dolls were also rented out to others for service. The main plot revolves around an Auto Memory Doll named Violet Evergarden as she tries to discover her purpose in life.

It’s definitely a series that felt different to me compared to some of other Kyoto Animation’s recent works. This one was an emotional storyteller that gave us a reason why we should care about Violet Evergarden; not just the story but Violet’s own journey of discovery. While I can’t say it’s always an effective tearjerker, it’s still a show that’s worth investing time into. Well done, Kyoto Animation, you have earned yourself a spot on my
10 Best Anime of 2018 .

3. Nanatsu No Taizai: Imashime No Fukkatsu

The Seven Deadly Sins is my favourite manga series of all time, and when I saw that the Revival Of The Commandments arc was getting an anime adaptation in the form of Season 2, I was hyped after waiting 2 years from Season 1 to 2018. Just as Season 1, Season 2 knocked it out of the park.

Sure, the story is kind of silly at some points and the animation is the same as last season but in my opinion where TSDS really stands out is in characters and enjoyment. Season 2 gives us a look into the further backstory of some of the characters and sets up the series for the further story. Let me just tell you, after the part of the story that Season 2 adapts, the series becomes very story driven and based and just so much action. The enjoyment of this show is through the roof. The action is insane and just as a whole it’s such a fun show to watch, with basically no boring moments.

I would highly recommend watching this, as although it may not be a beautifully written masterpiece I haven’t enjoyed an anime as much as this in a while. The sheer amount that you end up enjoying this anime puts it at the number 3 spot on my 10 Best Anime of 2018.

2. Rascal Does Not Dream Of Bunny Girl Senpai

If you haven’t read my review of the show go and read it to see why the show ranks No.2 this year on my top 10 anime of the year 2018 and was awarded my anime of the season for Autumn 2018. The review is here.

In short, Seishun Buta Yarou has the best characters I have seen this year, with a plethora of unique and lovable characters like Sakurajima Mai and my personal anime protagonist of the year, Azusagawa Sakuta. The show takes you on a joyride on the feels train and never lets down. The biggest merit of the show is its willingness to do whatever it needs to and not compromise.

1. Wotakoi: Love is Hard for Otaku

As of I have not written a review for Wotakoi yet, despite it being my anime of the year, and that’s simply because I just binged it two nights ago. I first saw this anime on Amazon Prime a while back and kept on pushing it back until I decided to just watch it over the course of a week or so. Needless to say, I did not sleep that night.

Wotakoi is the most innocent love story this year. It is an utterly perfect anime except for the fact that it only has 11 episodes, with no news of Season 2. The soundtrack for the anime, especially the opening “Fiction” by Sumika is the best I have heard in a long time. I have been unable to stop singing it for the past two days and I don’t see myself stopping anytime soon.

With a very classic story done beautifully and the most innocent and lovable characters of 2018 Wotakoi is a breath of fresh air in a set of anime series’ that has been dominated by tragic stories. You can read more when I publish my review of the show. I loved it so much that I purchased all 3 English Volumes of the Manga series, and of course that it ended up at the top of my 10 Best Anime of 2018.

So that’s my 10 Best Anime of 2018. The thing about anime is that it is very subjective to people’s tastes, and everywhere I looked online, I could not find a definitive list of the best anime of 2018. So I also want to know what you consider the best of 2018’s anime. Comment your list down below and let’s welcome in the Winter 2019 Season and Happy New Year! 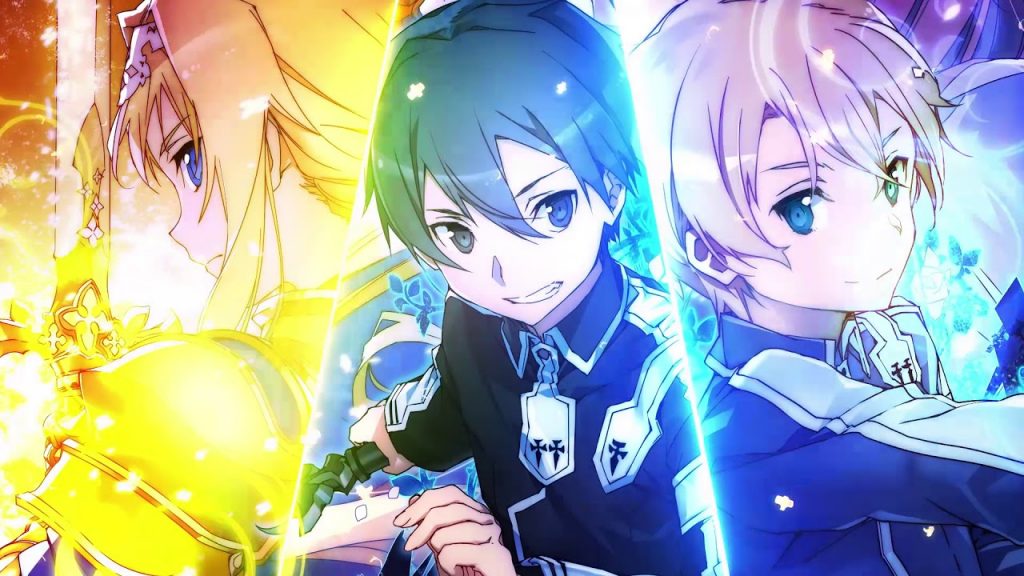 Needs to remember to add these things in

Last year I made a 2019 box office predictions list on this site and absolutely failed. I didn't expect Joker…

Kimetsu No Yaiba (Demon Slayer) was undoubtedly the best anime of the Spring 2019 Season, when it began, all the…